Measures taken against the spreading of Covid-19 impacted power demand in various European countries during the second quarter of 2020. There was a large decline across Continental Europe and the UK, with Italy, the UK, France, Spain, and Germany seeing a 10%, or higher, drop in power demand. In the Nordic countries, power demand was close to the previous year’s levels, and the impact of the Covid-19 pandemic has so far been negligible.

Electricity is expected to continue to gain a higher share of total energy consumption in the longer term. Over the next few years, electricity demand in the Nordic countries is expected to grow annually by approximately 0.5% on average. The growth rate, however, will largely be determined by the macroeconomic development in Europe and especially in the Nordic countries. In the longer term, the rate of electrification of the industrial, transportation, and heating sectors is a key element determining the growth in electricity consumption.

According to preliminary statistics, electricity consumption in central western Europe (Germany, France, Austria, Switzerland, Belgium, and the Netherlands) was 265 (299) TWh during the second quarter. The significant drop in power consumption was caused by the impact mainly on industrial demand following the Covid-19 pandemic. In Germany, the average spot price decreased significantly to EUR 20.3 (35.8) per MWh in the second quarter of 2020. Low gas prices together with decreased power demand pushed down the German spot prices during the second quarter. In January-June 2020, the average German spot price was EUR 23.4 (38.3) per MWh.

Fortum’s Russia division operates mainly in the Tyumen and Khanty-Mansiysk area of western Siberia, where industrial production is dominated by the oil and gas industries, and in the Chelyabinsk area of the Urals, which is dominated by the metal industry. Uniper’s Russian subsidiary Unipro PJSC operates in the Smolensk, Moscow, Krasnoyarsk regions, the Perm territory, and the Khanty-Mansiysk Autonomous District.

The Russian market is divided into two price zones and Fortum’s Russia division operates in the first price zone (European and Urals part of Russia), while Uniper operates in both the first and second price zones.

In Russia, capacity payments based on CSA contracts are a key driver for earnings growth, as CSA payments are considerably higher than for capacities selected in Competitive Capacity Selection (CCS) auctions. Currently, Fortum’s Russia segment’s CSA capacity amounts to 2,368 MW. Correspondingly, Uniper’s CSA capacity amounts to 2,455 MW. In February 2020, the System Administrator of the wholesale market published data from 2019 regarding the rate of return and the CPI, which were used to calculate the CSA price for 2020. The CSA payments were revised downwards to reflect the lower Government bond rates and higher earnings from the electricity-only market.

In addition, thermal power plants are entitled to clearly higher CSA payments starting approximately six years after commissioning (see tables below). In 2020, an increase in CSA payments is expected for one unit of Fortum’s Uniper segment, but none for Fortum’s Russia segment’s generation fleet. After the CSA period ends, units can receive CCS payments from CCS auctions

The Taxonomy Regulation, setting sustainability criteria for about seventy business sectors, was formally adopted by the European Council and Parliament in mid-June. The detailed metrics for the criteria are still to be defined in the delegated acts that the Commission will issue. The status of nuclear power is still open, and the Commission therefore decided to establish an expert group to investigate the environmental impact of nuclear power generation.

Fortum has consistently called for a European taxonomy that is well-aligned with the EU’s 2050 climate neutrality goal and that takes duly into account the complementing role of technologies aimed at reducing or removing greenhouse gas emissions. Fortum has also asked for a prompt assessment of the environmental impact of nuclear power.

In July, the EU member states reached a political agreement on the EU budget and Covid-19 recovery package. The ambitious EUR 1.85 trillion recovery package, composes of a seven-year EU budget amounting to EUR 1.1 trillion and a EUR 750 billion ‘Next Generation EU’ fund. This recovery plan is unprecedented and innovative as it allows bringing the recovery and the European Green Deal together whilst leveraging the high EU credit rating to borrow under the best conditions. To sustain its ambition, the Commission is relying on a temporary increase of national contributions of 2% of GDP together with new revenue streams. The package will be finalised during the autumn.

Fortum supports the emphasis placed on climate change mitigation and digitalization in the recovery as well as sticking to the commitments on the Green Deal.

On 10 June, the German Government approved the National Hydrogen Strategy, which focuses on hydrogen produced on renewable energy (green hydrogen). The strategy provides a framework as well as a mid-term action plan for hydrogen generation, transport, and use. To advise in implementation of the strategy, the Government has set up a National Hydrogen Council, in which Uniper’s CEO Andreas Schierenbeck has been appointed as a member.

EU’s Hydrogen Strategy was published on 8 July. Although the EU is focusing on green hydrogen, the Commission also allows hydrogen produced from gas during a transition phase. The strategy proposes both quantitative targets for electrolysers (6 GW installed by 2024 and 40 GW by 2030) and possible sector specific quantitative targets for hydrogen use to create demand pull.

Fortum welcomes the strategies with the strong push to develop the hydrogen economy based on renewables and gas, however regrets that the role of nuclear in hydrogen production is overlooked. Uniper is well positioned to participate in the development and ramp-up of the hydrogen market, with experience from the natural gas sector and power-to-gas pilot projects.

In June, the German Parliament passed the coal phase-out law. It sets the path to phase out hard coal and lignite-fired electricity generation by 2038 at the latest. In 2019, 23 GW of hard coal and 21 GW of lignite capacity were on the market.

The Government has set the schedule for the exit of lignite mining and power generation in a contract with the lignite operators. The closures of hard coal plants will, up until 2027, be determined based on auctions.

Uniper announced a strategy for decommissioning of its European coal power plant fleet already in March 2020.

In April, the Ministry of the Environment published a draft law for consultation that would implement the EU 2018 waste package into Finnish legislation. The proposal also includes some national changes in the producer’s responsibility for packaging waste.

Fortum has highlighted the need to allow the possibility for specialised producer responsibility entities in order not to harm the positive development for plastic waste collection started in 2016. Fortum also opposes the proposal to lower the cost responsibility of packaging producers to 80%.

The 30-year-long process of developing a final repository for spent nuclear fuel in Sweden is coming closer to an end. In June, the final legislative hurdles were cleared in the Swedish Parliament. The municipality of Östhammar is expected to approve the project in September, and thereafter the Swedish Government is expected to make its final decision; the time schedule, however, still remains open.

The estimated annual cost for delaying the project totals EUR 80 million for all nuclear owners. Furthermore, the approval of the final repository is part of the same approval process as the expansion of the short-term storage for spent nuclear fuel. This storage will reach its capacity limit in a few years and, consequently, needs to be expanded.

The development in Sweden is being monitored closely in Norway. The pending steering alternatives are either a waste incineration tax or opting waste-to-energy into the ETS (Emission Trading System) starting from 2021.

In Finland, the Ministry of the Environment commissioned a consultant study on the feasibility of a waste incineration tax in order to promote the preparation and use of recycled raw materials, to be completed by the end of this year.

Fortum opposes the waste incineration taxes, as they will not have any meaningful or demonstrated steering effect to stimulate waste prevention, recycling, or lower greenhouse gases. Taxes or product design standards must be placed higher up in the waste hierarchy.

On 25 June 2020, the Swedish Government adopted a National Prioritisation Plan for Hydropower. As a part of the process to fully implement the EU Water Framework Directive, the plan sets out the timeline and priorities for renewing hydropower permits during a 20-year period. The Government emphasises the need to keep generation losses of all Swedish generators below the 1.5 TWh level when deciding on environmental measures, also taking into account the impact from Nature 2000 areas.

The plan is well in line with Fortum's position and provides the authorities with clear guidelines.

Proposal for the reduction of electricity tax in Finland

Fortum is the third largest power generator and the largest electricity retailer in the Nordic countries. Globally, we are one of the leading heat producers. As two thirds of our power production is hydro and nuclear, Fortum is also among the lowest-emitting generators in Europe. 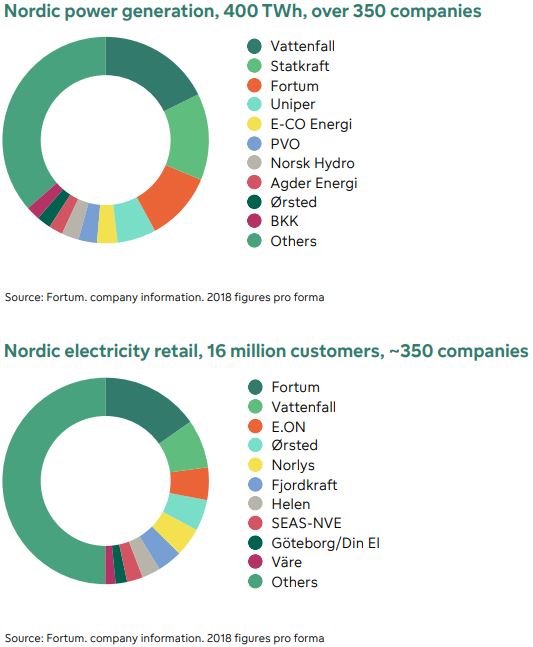 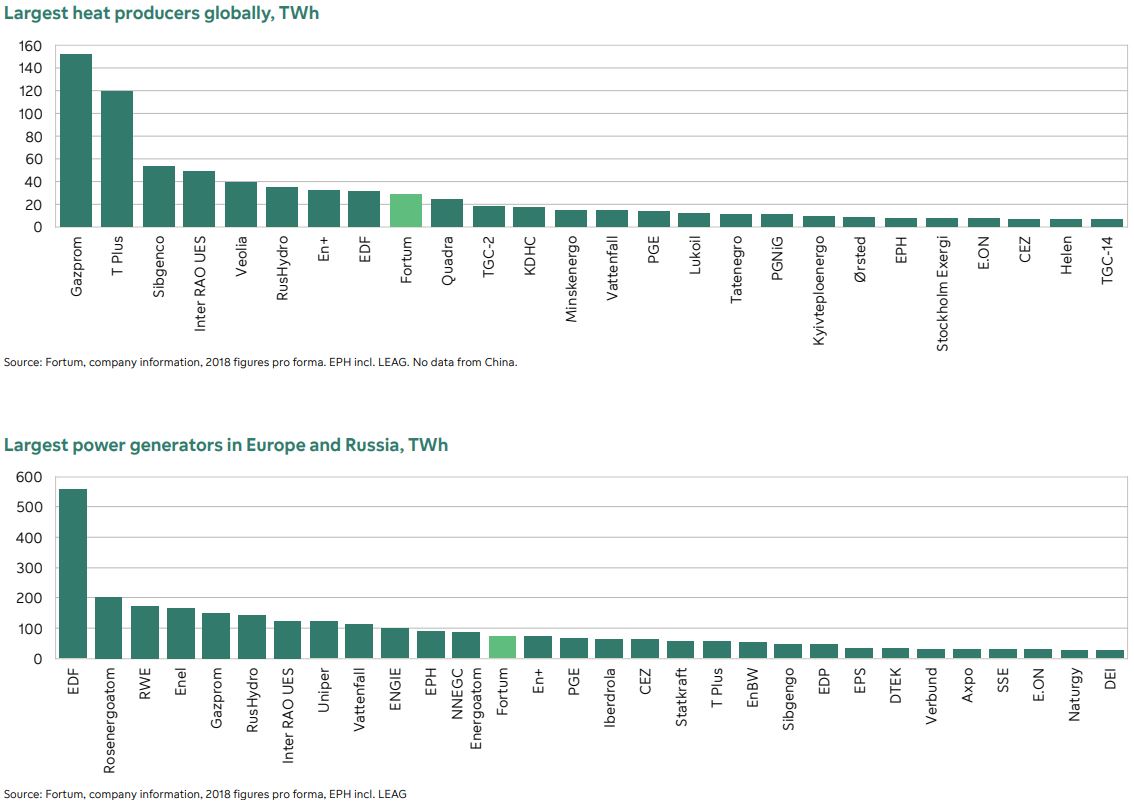